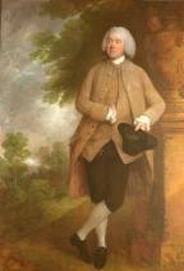 Portrait of Charles Tudway
During Georgian times, the Tudway family of Wells began acquiring land and tenements in the village of Dulcote.  It seems to have begun with Charles Tudway (1713-1770) and burgeoned during the lifetime of Clement Tudway (1734-1815).   Although their land interests were in no way limited to Dulcote, they systematically acquired virtually all the land in Dulcote throughout the 18th and 19th centuries.  The blueprint for this land acquisition was outlined clearly for future generations in the nearly 11,000 word will of Clement Tudway in 1803 which reads more like an inventory of a real estate empire, complete with its long-term business plan.  With no male heirs, Clement Tudway specifically and legally directed his nephews John Paine Tudway, Clement Tudway, Francis Drake, and Clement Drake on how to maintain and increase their land and how to ensure that this land would stay within the family.  Furthermore, the land in their possession was only theirs to use for the duration of their lives.  Clement Tudway had a plan for future succession as well.  While Tudway women received generous cash settlements in Tudway wills (providing they relinquished any land claims they had), Tudway men were entrusted to possess the freehold, copyhold and leasehold estates for the span of their lifetimes and upon their deaths the land went to the next male heir specified.  Furthermore, Clement Tudway directed that his nephews and subsequent male heirs should take every opportunity to purchase any of the copyhold or leasehold estates as the laws of ownership changed to make private ownership more possible.  Thus, through Clement Tudway's brilliant business strategy, this family maintained and increased their land ownership and fortune.

What this meant for a small community such as Dulcote was that, with the exception of some minor bits of  church-controlled land, the Tudway family eventually became its sole landlord.  There is evidence that the 1870's began an expansion phase when C.C. Tudway built new cottages in Dulcote.  The following two architectural drawings developed for Tudway show fascinating detail on the plans for two of these cottages . . . 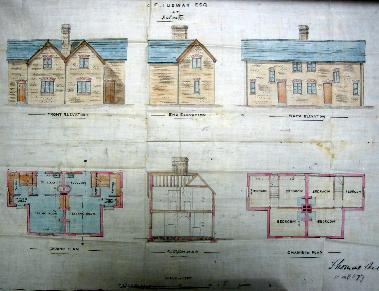 Blueprints which remain on record illustrate the type of cottage C.C. Tudway was designing at the height of his building projects in Dulcote in the 1870's ...

This first image is an architectural drawing matches the description of Lot 14 (see below), now known as The Poplars 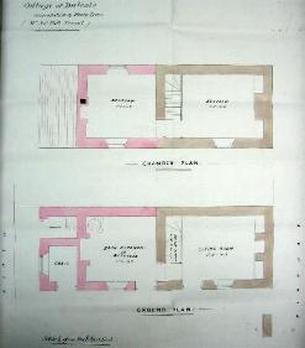 
There several blueprints/drawings showing plans for 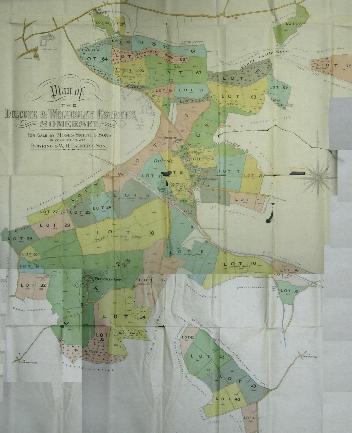 After such a clear success with their land lordship of Dulcote, it seems so unusual for the family to then sell it all at once -- at a two-day auction in 1913 at the Guildhall in Wells!    At the time of the sale, the land was owned by one person -- Charles Clement Tudway.  It was perhaps significant that C.C. Tudway was the last in the male-line of the Tudway name and that thenceforth the family name was honoured and maintained by future generations through the hyphenated name of Tudway-Quilter.   And, according to his grandson, David Tudway-Quilter, C.C. Tudway's motivation for the Dulcote auction was likely to free up some financial resources to support his other property investments, especially in Wells.

In all, C.C. Tudway placed 78 lots on auction from Dulcote, Wellesley and surrounding area.  The whole of the village went under the hammer with two exceptions -- 1) the school chapel (given by C.C. Tudway's mother, Maria Catherine, to the villagers in 1860), and 2) the  semi-detached cottages beside it now known as Fountain Cottages (perhaps because there were care-taking duties that residents of one of these cottages performed for the chapel).

The advertisement in The Wells Journal on July 4, 1913 contains the following tempting description . . .

The 18 July, 1913 Wells Journal reports in great detail on the success of the sale.  While not all of the lots were sold on the day, 60 of the 78 lots were sold for a total sum of £35,336 11s (including timber rights).  Attendance at the sale was numerous at the outset the auctioneer expressed the sentiment that he would hope that the current tenants would be able to continue to live in their residences as before.

Details of the Central Village of Dulcote Lots for Sale ... (1)

What might also be of further interest is the sale outcome of some of the other notable Dulcote area landmarks as well . . .
but ...


1 Some of the homes on these lots today are original to the sale, others have been renovated or newly-built since 1913.
2 Old land measurement:
acres/roods/perches
1 acre = 4 roods
40 perches = 1 rood
Proudly powered by Weebly