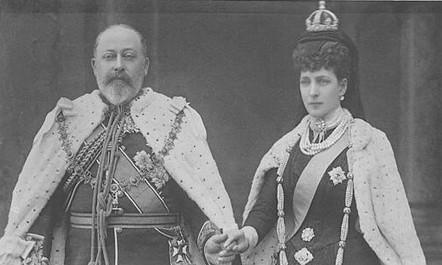 King Edward VII and Queen Alexandra at his 1902 Coronation. See more detail by clicking on this image
August 9, 1902
Elizabeth Knight looked through her fresh lace curtains onto the high street of her Dulcote home into the early mist of an August day.   She should have had a lie-in today so she would be fresh for all the activities planned in the village.  But she had too much work to do before mid-day dinner for which she planned a special menu. Florence had gotten up with her mother and was already baking the puddings. But Elizabeth's youngest daughter Gertrude had been given the day off from the shop and was still asleep.  It was only fair, Elizabeth thought, that she be allowed to sleep a bit longer, being the only one who still worked for a living in the Knight household.  Not that Frederick hadn't paid his dues in his days as butler.  If not for his inheritance, he would be up preparing someone else's house party and greeting their posh guests. 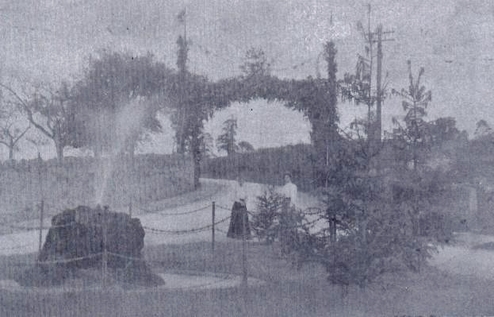 The arches over the roadway were erected in honour of the 1902 coronation
Dulcote Church School would of course be re-hanging the pictures painted in June by the children for all to see -- the ones of King Edward VII and Queen Alexandra.  This was just one of many projects that retired school mistress Elizabeth Knight had assisted the school's new mistresses with in their preparations for the event.  There had been one school lesson in particular though -- a lesson to the entire school about Coronation Day -- about what the coronation service would be like.  The service would be led by the archbishop with its introductory processional, anointing, enthroning and finally the presentation of the new monarch.  This was information that everyone in Dulcote would be interested in. Queen Victoria had been on the British throne so long that few people in Dulcote remembered a previous Coronation Day.


So when 26 June finally arrived, the people of Dulcote felt both patriotic and excited.  That is, right up until that moment when last minute word came down from the Palace that the Coronation had been canceled!  Those usually in the know wondered if had been because of the Archbishop of Canterbury.  He was so old and frail these days that there were those who speculated over his ability to conduct the ceremony. Later reports, however, announced that it was not the Archbishop but the King who was ill.  Instead of a ceremony at Westminster Cathedral, their new king was being operated on this very day -- for appendicitis -- and it was said that he was very ill indeed from the resulting infection.  Patriotic joy had turned to national worry in an instant.   After days of prayers, finally came confirmation from the Palace that the King would fully recover.  A new Coronation Day of 9 August was announced.  The nation's enthusiasm returned.
And so on this August day, a new Coronation Day, Elizabeth Knight could feel the return of her own expectations as she took in the colour and splendour through her misted cottage window.  The Dulcote gardeners had used all their talents to train vine arches over the hamlet's roads.  The longer growing season had only improved these living arches, adding majesty and glory to the occasion.  There was bunting everywhere; and wreaths and floral garlands on the gates and walls of large home and small cottage alike.  Why at "Little Fountains", the giant letters ER, " Edward Rex", had been arranged in leafy stems and attached to the upper storey of the house.She could just hear music and voices wafting through the church school's windows. The children were in especially fine form with their extra six weeks' practice, even though their numbers had been reduced due to some choir members being on summer holiday with their families.

As she stood there gazing out, Elizabeth was imagining the high spirits of the factory workers over at Mr. Joiner's Leather Board works as they draped the factory windows and machinery with streamers in anticipation of their half-day off.  The farm workers at Berryman's and Hill's farms would certainly be quick-stepping through the essential chores so that they could take some time away from their duties later in the day.  And over at Little Fountains, Mrs. Snelgrove's children and grandchildren would be setting up for their evening supper party to which the Knights had been invited -- complete with a traditional game of croquet.

* Facts are taken from coronation history, old photographs of Dulcote on Coronation Day and census data. 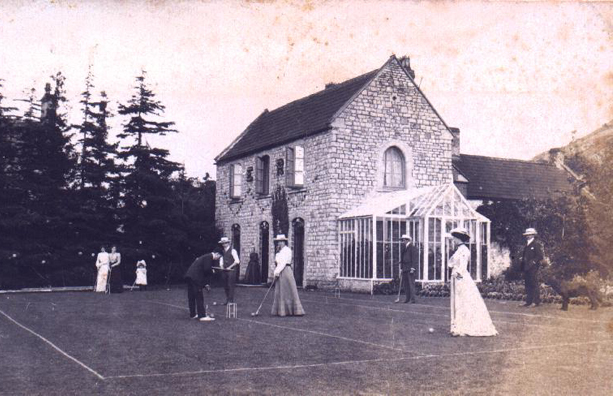 Note the lettering on front of Little Fountains "ER" for Edward Rex. This was obviously the coronation party of the Snelgrove family (with the tiny figure of Mrs. Elizabeth Snelgrove by the door to the house)
Proudly powered by Weebly