"By the death of Mrs. Elizabeth Snelgrove, widow of the late Mr. Snelgrove, the villagers have lost a true and good friend.  Her kindness and generosity to the inhabitants of the little village endeared her to all, and she will be greatly missed..."

Edwin Bendall's eyes looked out solemnly over the misty landscape.  It had been years since he had moved to London and he couldn't have regretted his infrequent visits back to Dulcote more than he did on this day.   The crowd of somewhat familiar mourners were gathering around the newly-dug grave of his grandmother Snelgrove here at the Wells Cemetery.  His mother Sarah stood next to him in her modest black long coat and large-brimmed dark-brown hat with the dark lace pulled down just shadowing her puffy eyelids.  She had her arm linked through his and was leaning just a little on his strength.  On the other side of his mother were his aunts, Lizzie, Kate, and Mary leaning likewise on their husbands.  They spoke back and forth in hushed tones from time to time as more villagers joined the assembly.    Uncle William, who had traveled down from London with Edwin and Sarah, stood solemnly and silently on his own a few feet away.

Edwin hardly ever saw the aunts and uncles these days, although he remembered them well from his boyhood.  He remembered as well the Misses King, who were visibly shivering as the cold damp March air settled onto their clothes and inadequate shoes.  Their father, Mr. King, had placed his own wreath on the lawn just at the foot of the grave.  In the crowd he nodded to Mr. and Mrs. Knight, his grandmother's particular friends.  There were others here as well but no more that he could recognize just now.

So many flowers from so many families and friends -- the Williams, Hills, Powells, Fawcetts and Webbs.  There was even a floral cross from the Dulcote Sunday School children, a project so dear to his grandmother's heart.  Over dozen floral tributes on and about his grandmother's coffin, including the two wreaths from Uncle Teddy's family in America.

At the head of the coffin, the Reverend Beresford was clearing his voice, preparing to articulate the grief which had drawn them all together at this hour...

"Dear friends, we are living in very sad times, I think.  Our country is besieged by war.  Our fathers and brothers of Dulcote and Wells are as we speak huddling in the cold trenches of foreign fields.  Our government officials had promised that this terrible war would have been over by Christmas, but now it is apparent the conflict is going to be drawn-out much longer.  And, we have gathered too frequently on this lawn of late.

Just when we thought we could not have been more sad comes the passing of our dear sister Elizabeth -- a mother of 9 children and grandmother of 15 -- some of whom could not be here due to the inconveniences of this world conflict.  We will miss her terribly.  She had such a good heart and was known and loved by everyone in our cherished community of Dulcote.

But as much as we will miss her, Elizabeth has had a long and fruitful life.  Married to her Edwin for 30 wonderful years, she often confided in me how she had missed him since his passing 16 years ago.  I believe she is happy at the certain knowledge that she is re-united with him now.

Elizabeth had lived in "Little Fountains" for the past 35 years and it is hard to imagine that she was not born here but in Gloucester.  But Edwin was born in Dulcote.  He and his brothers helped their father run the Dulcote Paper Mill in their youth, and after their father's early death, they helped their mother continue the mill's business.  Both Edwin and his brother John moved to the London area as young adults.  Edwin opened a drapery business just outside of London where he met his future wife Elizabeth and where 8 of their 9 children were born.

Happily, Edwin and Elizabeth returned to us in 1880 because as much as Edwin loved his home in Gloucester, he could not get Dulcote out of his heart.  The Snelgroves bought "Little Fountains", one of the most beautiful homes in the village.  And, almost from the beginning, Elizabeth involved herself in this community -- with the church right across from her home.

Edwin's brother, John Snelgrove, co-founder of the Marshall and Snelgrove Department Store, also returned to Dulcote whenever he could and kept his interest in the paper mills for many years. But although he never returned to Dulcote upon his retirement, it also was never far from his heart. ..."

The Reverend Beresford had finished his eulogy.  How had it ended?  Edwin quickly added his own benediction. By now Reverend Thwaites, having taken Reverend Beresford's place, was bowing his head. "Our Father" he chanted ...


* Facts are taken from a detailed newspaper article, 1915 articles on the war and specific family genealogy. 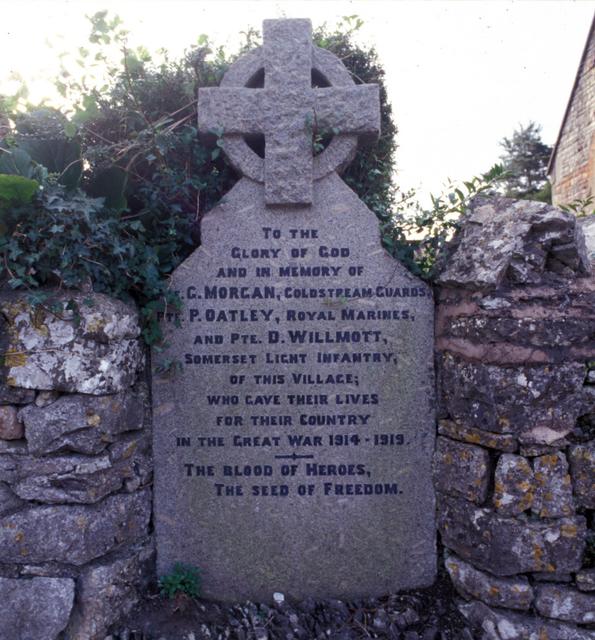