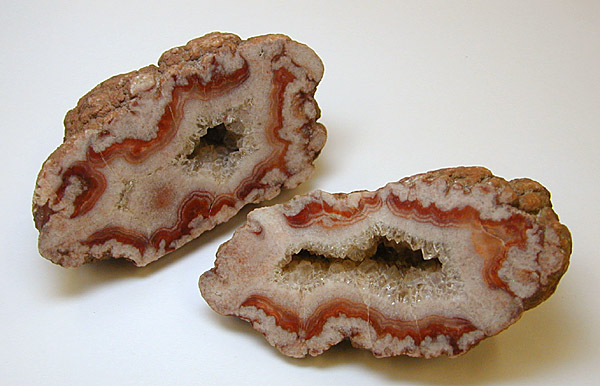 Example of Dulcote stone. Click for details on where to buy some.

Minerals found in quarry rock include baryte, calcite, celestine, goethite and quartz.  Dulcote Quarry is renowned for its “potato stone", a nodule or geode of rock which contains crystallized minerals inside its potato-shape.
Quarrying on Dulcote Hill has been an industry since at least the mid-nineteenth century.  While no quarrymen appear in census data of Dulcote in 1851, there are 7 quarrymen listed in East Wells.  In 1881, there are still 7 quarry workers living on St. Thomas Street Wells, but now there are 22 other quarry workers living in Pilton and Shepton Mallet too.

It seems likely that these labourers lived in the same neighborhood so that they could travel together to the quarries with transport supplied by the company.  Some of the same family names of quarry workers appear in both censuses.

In the 1880's, there is evidence of four quarry sites -- one near Pilton, 2 more fairly central to the crest of the hill and one on the far side of the hill away from Dulcote, near the railway track.

The 1884 map also shows track and sidings owned by Great Western Railway which was opened in 1862 from Shepton Mallet to Wells.  Prior to this, hauling would have been by horse and wagon. 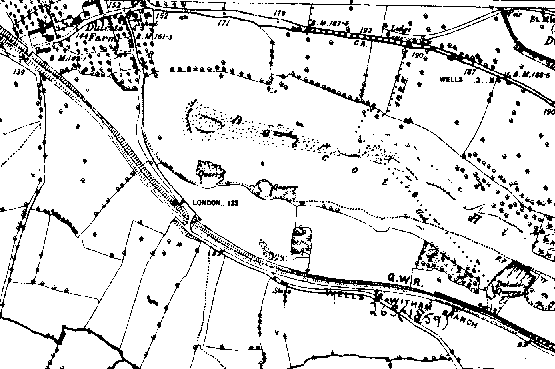 1884 Ordnance Map Showing the Quarry Boundaries
By the late nineteenth century, the quarry industry expanded considerably.  Records now indicate the direct involvement of the Great Western Railway Company in some of the quarries on the Hill.  In fact, one of the two quarry managers living in Dulcote at this time worked directly for this company.  Two quarries are now listed as "old quarries".  The quarry near Pilton is now distinctly larger as is the quarry on the crest of the hill above Dulcote.  Mining practices at this time were not without their difficulties.  In 1900, blasting at one of the quarries caved in a well which temporarily stopped the flow of water from the natural spring -- Dulcote's water supply. 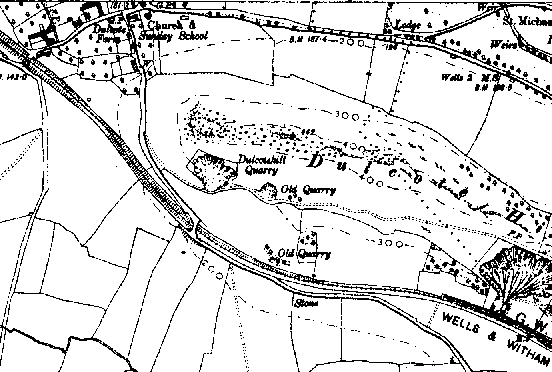 1900 Ordnance Map showing old and new quarries
By the early 1920's the quarry was bought by Foster Yeoman, the son of a ship owner.  He used more modern quarrying methods and eventually all the quarries linked together into one pit.  By the end of the first world war, he was employing more than 100 men, including war veterans, as the business expanded.

At a 1933 meeting of members of the Somerset Archaeological and Natural History Society right at the quarry site, geologist Mr. H. E. Balch pointed out his serious concerns about overworking the resources of the hill.
It is obvious from an examination of its surface that (Dulcote Hill) has been subjected to most extensive denudation,
which has removed not only 3,000 feet of limestone from above the underlying Old Red Sandstone, but many thousands                                                           of feet of Coal Measures that overlay both.

By the 1940's, the business had grown to the extent that 150 railway wagons were needed to transport quarry gravel and stone blocks. Local planning departments granted the licensing to permit the removal of more than half of Dulcote Hill!  However, less than a decade later public pressure caused this decision to be overthrown, and from that point more responsible quarrying practices were dictated -- but not before the stripping of much of the top of the hill. Quarrying of Dulcote Hill is now much reduced.  Rail transportation was replaced by lorry transport in the 1950's and continues to this day -- improved with the construction of a relief road to avoid residential areas.  In compliance with law, landscaping is used to prevent erosion and to conceal the scars left by the mining from view.

In 2007, the company quarrying on top of Dulcote Hill went into receivership. Today the land has being offered for sale with a view to re-development. 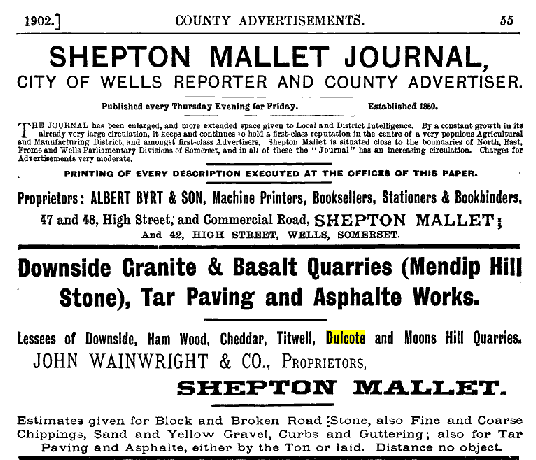 Advertisement from a trade directory 1902 shows John Wainwright and Company acting as distributor for quarry operators on Dulcote Hill.
Proudly powered by Weebly