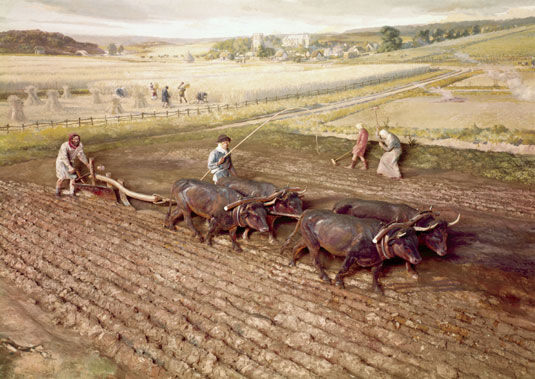 This artist rendition should the type of farming that would have been practiced in medieval times. For more information about this, please click on the image.
Medieval Times
As with other English countryside, farming in Dulcote in the middle ages would have been open field, policed by a hayward to settle land disputes.  Most of this land either belonged to, or was leased from, the bishop or lord of the manor.  At that time, Wells area farming was mainly of livestock and grains.

As the population increased, so did the demands on food production. To accommodate this, farmlands were increased by the re-allocation of surrounding woods and moors. Better growing methods were also available to the Dulcote farm labourer by this point in history, such as crop rotation and feeding the larger animals root crops in order to increase the nitrogen in the manure which fertilized the fields.

Today, all that remains in Dulcote of medieval times is a holloway -- a track through the fields that has been formed by constant wear over the centuries. 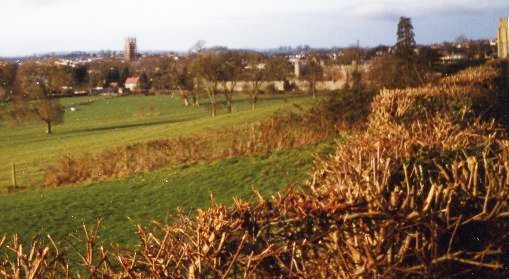 A good example of hedgerows, natural farm boundaries, in Dulcote (looking over the fields towards Wells Cathedral)
Post Medieval Times

After the manor system of the middle ages began to decline,  peasants gradually began to gain more control over the use of their land.  Some were even able to buy land from their lord to become yeoman farmers. As changes in land ownership began, so did the look of the landscape.  Pastures and fields start to be separated, enclosed by fences, hedges, or walls.

In Wells area at this time, farming gradually decreased in crop production but increased in livestock, especially dairy cattle with some sheep on the moors.  Apple orchards were planted abundantly as well. 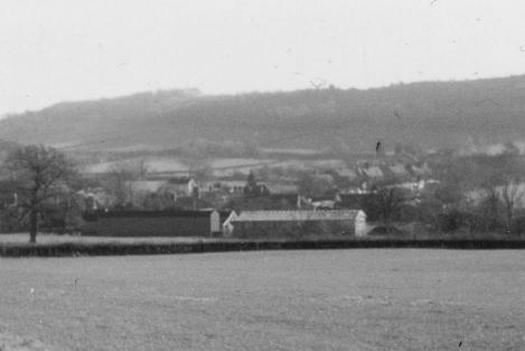 Looking towards Mill and Bridge Farms -- the only operating farms in Dulcote today.
Victorian Times


In the nineteenth century, farming was still the primary activity of the people of Dulcote, but farm size and use was in a constant state of flux as farmers arrived and left, hoping to make money or leave to make fortunes elsewhere.  Farming was almost exclusively livestock, especially dairy cattle, although trade directories of this time categorized most the farms in Dulcote at this time as "agricultural"  indicating crop production as well.  Ordnance maps of this time period all show a large number of orchards.   The production of cheese, butter and cider in this area was high and there was enough of these products to sell in other markets in addition to locals ones.

By the mid-nineteenth century, there were 6 farms listed in Dulcote -- 29 farm labourers in 27 homes.  The 1851 census shows that all but one of these homes had a single-income, that is, only one member of the household was listed as employed.  One can only imagine the challenge that such a pittance of an income would create for these families.

By 1881, while the number of farms remained the same, ownership of the farms had changed hands.  The larger farms were getting larger.  There were now 22 labourers in 19 cottages and those households now tended to have more than one income per family -- some in other trades and in town businesses -- increasing the household income of these Dulcote families. 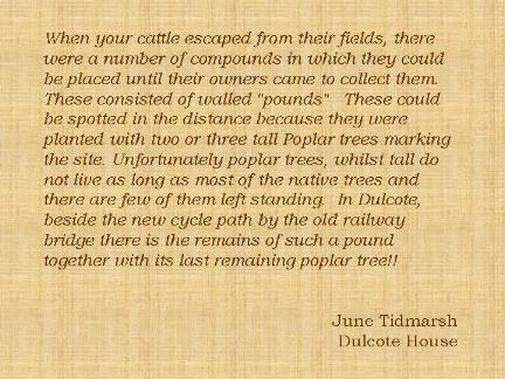 By 1901, the number of farms in Dulcote had been reduced to 3 farms -- Bridge Farm, Dulcote Farm and Fountain Farm.  The only constant in farm ownership at this time was the Hill family who remained farmers in Dulcote throughout this entire fifty year period.  At this time, the number of households involved in the farming business was reduced to 14 cottages.  Again the families in these cottages tended to have more than one income.  Few of the farm labourers remained the same -- although the notable exception was the Oately family, who had been farm labourers loyal to Dulcote farms since the mid-eighteenth century at least.  The explanation for this state of constant change in the farming community of Dulcote is likely attributable to the outside influences on British farming in the late nineteenth century.  By then, farms were competing against grain shipments from North American markets and livestock from New Zealand.  Also, labour power to the farm was siphoned off by increased urban opportunities which lured the younger generations.

There are only two operating farms in Dulcote today -- both primarily dairy. Nonetheless, the hamlet still retains its pastoral character and lush landscape. Furthermore, with most of the original hedge-rows and walls separating the fields as shown on nineteenth century maps, it is easy still to envision the Dulcote of yesteryear. The buildings on this farm, Fountain Farm, have been converted into residential homes today.
Proudly powered by Weebly