Manor courts were established for freemen from the hamlet to resolve local disputes and matters of law and order. The manor court was convened regularly to judge those accused of breaking their own laws. While manor court sessions could be conducted in communities in a church or on a green, there are records from the mid-eighteenth century which indicates that there was an actual courthouse in Dulcote. Later, however, a survey from about 1785 shows that by then the Court House was likely being used as a private dwelling, leased to William Ellis.  According to an 1829 map, the Court House, now identified as Tudway's Court House, was located on the same land at the shoulder of Dulcote Hill where Fountain Cottages now stands. 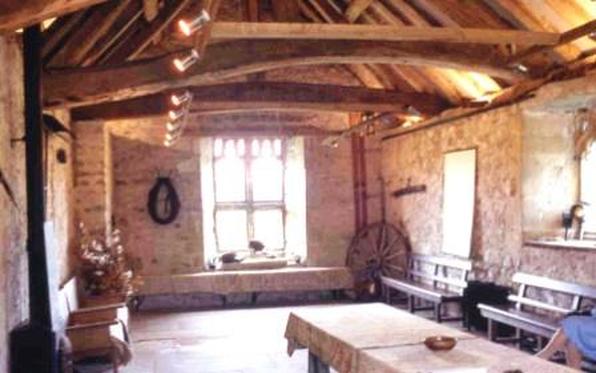 In general, manor court sessions were both formal and hierarchical.  Cases were tried by a jury with a minimum of 12 individuals and as many as 30!  Most verdicts came with either the levy of a fine or time spent in the stocks and were determined by the officer in charge of the court. Court fines were added to the lord's income. Manor courts mostly dealt with minor offences.  Church-held lands had their own courts as well. Serious crimes were usually tried at the king's court.  For example, stealing goods worth more than a shilling was a felony. A person found guilty of a felony could be executed.

But court sessions at Dulcote seemed to be a bit different to most manor courts.  For one thing, it was a very small community and so the number of jurors were less because there were less customary tenants and freeman in the community.  Also, the court rolls on record reveal that the Manor of Dulcote was joined with the Manor of Chilcote under one lordship, from about 1590 to 1771 when they were sold to Charles Tudway. Furthermore, there is also no record of sentencing to stocks on these rolls during this time period.  The two court books for the Manor of Chilcote and Dulcote, dated 1647-50, and 1654-67, provide us with impressions of a small court of 4 to 8 jurors, (some of whom were also being judged themselves) one steward and someone representing the landlord (or, in this case, landlady).  The two other major landowners, the Waldegrave family and the Church, were acknowledged as having a duty to be at this court, supporting the notion that by this time lordship of Dulcote was split between two major owners and the church.  The sessions were held semi-annually at the manor's courthouse.  These few records add to the our understanding of the evolution of Dulcote as a community, and provide fascinating detail about the social working of the hamlet in the seventeenth century.(1)