In addition to church landowners, there were two major freehold landowners in Dulcote from the late 16th century until the late 17th century.  The two were parceled up in the following way ...

proprietors  on   record  of The  Manor  of  Dulcote  and  Chilcote 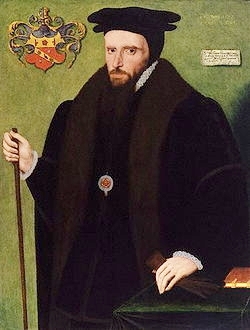 Sir 'William Petre -- for more information on his life and contribution, click on this image

Sir William Petre was a highly-successful, Oxford-educated lawyer whose family home, acquired from the dissolution of a monastery in 1539, was Ingatestone Hall in Essex. Also known as "Secretary Peter", his greatest claim to fame is that he served as Secretary of State to Henry VIII.  But even more remarkable was that he also served in similar capacity to Edward VI, Mary I, and Elizabeth I, despite the major political and religious differences in their respective reigns.

An interesting connection perhaps is that Sir William's son John married Mary Waldegrave, the great-aunt of Sir Henry Waldegrave, b. 1598. (see "The Ten Manors" below)

All deeds began this way and were mostly written on large parchment or vellum
During this brief span of years William Dodington was the proprietor of the manor. He was a courtier during the reign of the Tudors.  He was also a major landowner, including a large estate in Hampshire called Braemore.  Dodington held the office of auditor of the Tower Mint. In 1600,  depressed about a legal battle with his neighbours, the Bulkleys, Dodington apparently committed suicide by leaping from the roof of the Church of St Sepulchre in London.
1600- 1638

For more information on this man, click on this image
Succeeding William Dodington as proprietor was his son Sir William Dodington who was knighted by King James I in 1603. Sir William's life turned to tragedy when his son Henry murdered his own mother by running her through multiple times with a sword.  Sir William spent the rest of his life doing good works for the church in an attempt to redeem the family.
1638-1644 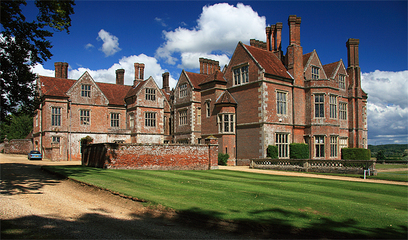 Braemore House was the central residence of the Dodington family. For more information on John Dodington (aka Doddington), click on this image

John Dodington, one of Sir William's sons, survived his father by only six years.  He married Anne Trenchard. Upon his death, John's young daughter, Anne inherited the Dodington Estates.  Since there was no male heir, the Dodington line of inheritance ended with  Anne.
1644-1690 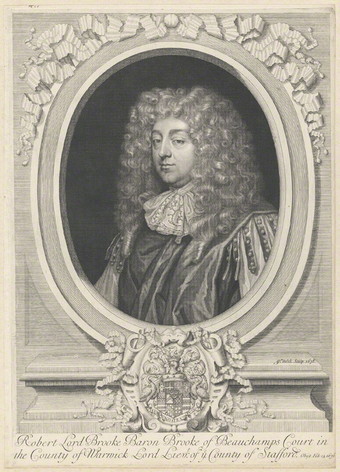 for more detail on Anne Dodington, click on this image 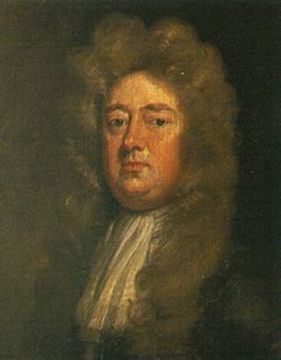 Next to inherit the Manor of Dulcote and Chilcote was Fulke Greville, 5th Baron Brooke of Beauchamps Court was the son of the 4th baron, Robert, by his first wife Lady Catherine Russell.
1710-1711 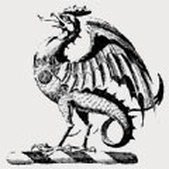 One of the symbols used by the Greville family. See more detail on this man by clicking this image

The succession of the 6th baron skipped a generation.  Fulke Greville, 6th Baron Brooke of Beauchamps Court inherited the title from his grandfather, also named Fulke Greville.  In other words, he was the son Lady Anne Wilmot and Francis Greville (who pre-deceased his father, Fulke Sr.)
1711-1727
1727-1771 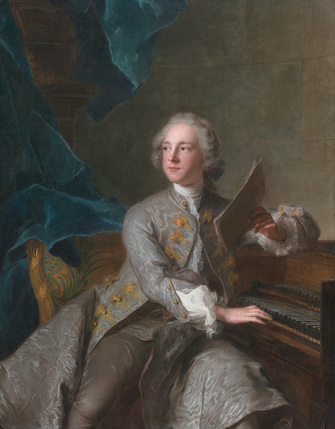 Francis Greville, 8th Baron Brooke and 1st Baron Brooke of Warwick Castle. For more details on this man, click of this image


Francis Greville, the next proprietor of the manor son Mary Thyme and William Greville, 7th baron.  In addition to being the 8th Baron Brooke of Beauchamps Court, Francis Greville was made 1st Earl Brooke of Warwick Castle in 1746 and Earl of Warwick in 1759 upon the death of the last Lord Rich.

In an Abstract of Conveyance, dated 25 June 1771 , St Cuthbert's, Wells, Francis Earl Brooke of Warwick Castle/Earl of Warwick sold much of  his entitlement to the manor & prebend of Dulcote & Chilcote to Clement Tudway, Esq 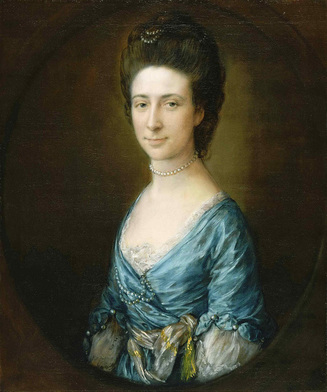 Mrs. Clement Tudway, portrait by Thomas Gainsborough. See more about this painting by clicking on the image


A member of the House of Commons, Clement Tudway of Wells served as the Father of the House from 1806-1815. This office was bestowed upon the longest continuously-serving Member.  Amongst the duties of this office is managing the election of new speakers of the house. Gainsborough painted two portraits of Clement and of Elizabeth, his wife. The manor was held by the Tudway family from this point until the land sale of the community in 1903.

The Waldegrave Family held this estate in Dulcote from at least 1648 until it was sold in the late eighteenth century. For the most part, they used the Ten Manors as annuity income which was at times distributed to other family members.  Thus, rather than occupying the land themselves, they leased or mortgaged the land to others who would re-lease or work the land for their own profits.

Sir Henry Waldegrave's signature
Proprietor of the Ten Manors during and perhaps prior to this time was Sir Henry Waldgrave  2nd Baron of Stanninghall and Chewton and Hever Castle.  His right to the ten manors is referred to as being "seized in fee simple", that is, having both possession and title of the property.
1658-1684

Waldegrave Family Crest, at St.Mary Magdalene, Chewton Mendip. For more details on the crest, click on this image

1680-84: Elizabeth Buckland, widow of John Buckland, the high sheriff of Somerset, was one of the gentry who held the mortgage (by demise) on this Dulcote estate from Sir Charles Waldegrave

1684-1689
Sir Henry Waldegrave, eldest son of Sir Charles held the proprietorship. His titles included 1st Baron of Waldegrave; 1st Lord of Chewton; comptroller of the King's Household. Henry married the natural daughter of King James II.  At his death, Henry left the care of these manors to Sir William Waldegrave, his brother Charles Waldegrave, and Henry Conquest as trustees to his younger son and his daughters in order to establish a dowry for the daughters and an annual income for his young son.  He was survived only by James Lord Waldegrave his eldest son, Henry his youngest son, and Arabella his daughter.  When all the trustees died, James Lord Waldegrave inherited the Ten Manors and the obligations under his father's will. 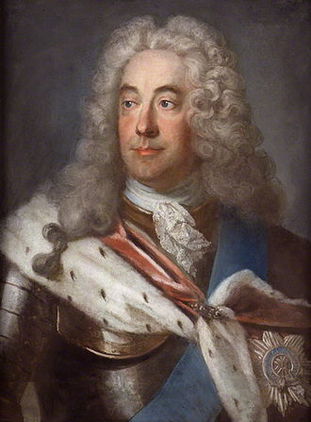 Rt. Hon. James, Lord Waldegrave. For more detail on this man, click on this image

Rt. Hon. James, Lord Waldegrave, Proprietor.  Once the dowry for Arabella Waldegrave and the annual income for his younger brother were arranged, James Lord Waldegrave; 2nd Baron Waldegrave (of Chewton); 1st Earl Waldegrave was free to use the remainder of the income of the Ten Manors, under the conditions of his father's will.  James arranged mortgages and long-term leases, and even sold the estates as he needed the income so that by the time his son James inherited the Ten Manors, there were fewer estates involved in the parcel and lands and tenements.  The description of the estates in an indenture dated 1726, sold by James Waldegrave, describes the property for sale as "farms".

James served as Ambassador to Vienna and then to Paris. 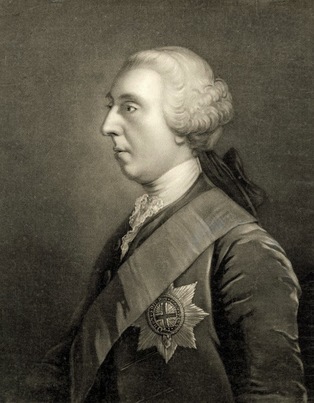 Rt. Hon. James Waldegrave, 2nd Earl Waldegrave. More details on this painting can be found by clicking on this image

Rt. Hon. James, Lord Waldegrave, Proprietor. He was the 2nd Earl Waldegrave and eldest son of the 1st Earl Waldegrave, James married Maria Walpole, daughter of Sir Edward Walpole.  He was the intimate friend of George II and for a time governor of the future king, George III.  He had the unusual honour of holding the office of Prime Minister and First Lord of the Treasury for only 5 days 1757!
1763-1784 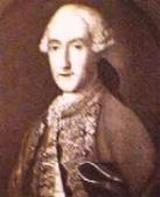 Rt. Hon. John Lord Waldegrave. Find more details about this man by clicking on this image

﻿
Rt. Hon. John, Lord Waldegrave ﻿was proprietor. He was the 3rd Earl Waldegrave and son of the 1st Earl Waldegrave.  John married Elizabeth Leveson-Gower, daughter of John, 1st Earl of Gower.  He was considered a distinguished general and Member of Parliament from 1747 to 1763.
1784-1913 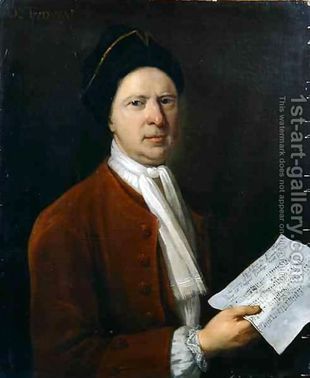 Thomas Tudway, a member of a long line of Tudway generations. For details on this painting, click on the image


The﻿ Tudway family ﻿purchased from John, 3rd Earl Waldegrave, likely first from an leasing arrangement and then likely by private sale when laws allowed.  He was a Member of Parliament for Wells from 1761 to 1815.  The Tudways held their Dulcote land until 1913 when most of their lands and possessions located in the village were sold off by Charles Clement Tudway at a two-day auction (See "1913: Dulcote for Sale").
Proudly powered by Weebly